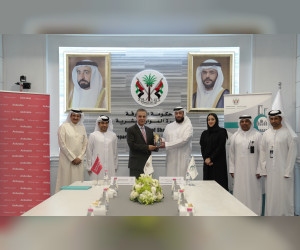 SHARJAH, 23rd January, 2023 (WAM) — Air Arabia Group and the Sharjah Human Resources Department (SHRD) inked an agreement, at the department’s main offices in Al Layyah, Sharjah, allowing the airline to participate in the “Save” scheme for discounts.

The agreement was signed by Omar Khalfan bin Huraimel Al Shamsi, Chairman of the Sharjah Directorate of Human Resources, and Member of the Executive Council of the emirate of Sharjah, and Adel Abdullah Al Ali, CEO of Air Arabia Group.

Per the terms of the agreement, cardholders are entitled to discounts when booking the specified packages.

Since its inception in 1988, Air Arabia has grown to become the first and biggest low-cost airline in the Middle East and North Africa area, with many hubs around the region and a network of more than 190 international destinations.

Director of Events and Social Activities Jawaher Saif Al-Oud, Director of Strategic Planning Abdullah Youssef, and Director of the Office of the Head of the Department Saif Daifis, were present for the signing of the agreement, in addition to Jassim Al-Kooheji, General Manager of Government Relations, and Abdul Rahman bin Taliah, Director of Executive Affairs, both from the Air Arabia Group.