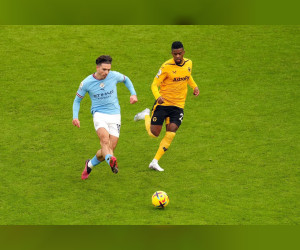 WORLD CAPITALS, 22nd January, 2023 (WAM) – Erling Haaland was City’s hat-trick hero as his fourth treble of the season ensured a 3-0 victory over Wolves.

In the meantime and in a thrilling Premier League match at the Emirates Stadium, Eddie Nketiah emerged as the match’s hero by scoring the game-winning goal in injury time to give Arsenal a 3-2 victory over Manchester United.

The 23-year-old scored on either side of a spectacular Bukayo Saka goal to give Mikel Arteta’s team a five-point lead over their closest rivals and a game remaining in the regular season.

At La Liga, Barcelona maintained their perfect January record with a spirited 1-0 victory over Getafe at Camp Nou, to maintain another weekend atop their league.

Blaugrana however struggled to win all three points, which they almost lost due to the miserable performance of key players in the latter half of the match, including Pedri, Busquets, Alba and Fati.