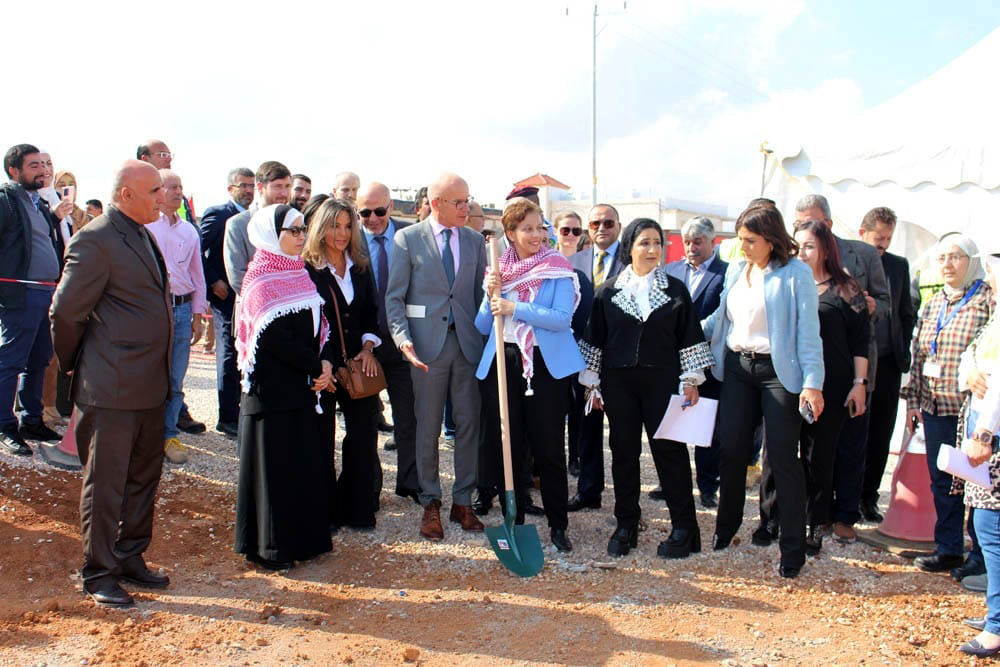 Ramtha, November 9 (Petra) – The Ambassador of the European Union to Jordan, Maria Hadjithodosio, visited the site of the construction works of Al-Nahda Mixed Secondary School in the city of Ramtha, whose construction cost reached 4 million dinars.

During the celebration today, Wednesday, of the start of construction work, the ambassador said that this partnership with the German Development Bank and the Jordanian government comes within the framework of joint efforts to provide safe schools in Jordan, reduce the burden of charter schools, confront overcrowding in classrooms, and get rid of the double-shift system, especially in The city of Ramtha, which is witnessing this because of the Syrian asylum.

The ambassador indicated that the school will consist of four floors and an area of ​​6 acres, where 5 rented schools will be dispensed with and a school operating on the double-shift system will be dispensed with, and 1,210 students will attend by providing 31 classrooms, from kindergarten to secondary school, in addition to the presence of a nursery Sports fields, laboratories and places for people with special needs.

Secretary-General of the Ministry of Public Works and Housing, Eng. Nadia Masalha, said that the ministry’s vision falls under leadership and excellence in government construction, its sustainability, highlighting its identity, and providing safe and economic roads and an advanced construction sector, to translate the government’s approach by working in partnership with ministries, agencies and all relevant sectors.

She added that these school projects came to remedy the consequences of the Syrian refugee influx crisis and raise the efficiency of the educational service. These schools have high-quality engineering specifications, and contain all functional needs and according to the requirements of the Ministry of Education to create schools that are attractive to students to serve the local community ideally.

She added that, in the first and second phases, the Jordanian government obtained two generous grants during 2017 and 2018 worth 65.6 million euros, including studies, designs, preparation of implementation bid documents, supervision and implementation work, and maintenance workers for schools for a period of two years, to establish 18 schools, divided into 10 new schools funded by The European Union, and 8 German government-funded schools.

Masalha thanked the generous support provided by the European Union, the German government and the German Development Bank to the Jordanian government for laying the foundation stone for this school, and everyone who contributed to the project being born, to raise the level of school buildings and infrastructure to provide a safe educational environment.

The Secretary-General of the Ministry of Education for Financial and Administrative Affairs, Dr. Najwa Qabilat M., said that the establishment of this school, which is expected to be completed after a year, confirms the Ministry of Education’s approach to prioritizing school projects and raising the efficiency of the educational process, as the Ramtha District is one of the highest percentages of charter schools in Jordan, where its percentage reached 33 percent, and the Al-Ramtha Brigade’s share of the schools funded by the European Union and the German Development Bank will be 4 schools, 3 of which are for girls and one for males.

She stressed that the celebration of the start of construction work for Al-Nahda School highlights the vision of the Ministry of Education in building a pioneering educational community, participating and committed to values, approaching science and excellence to reach universality, stressing the ministry’s endeavor, within the Jordanian response plan to the Syrian crisis, to enhance the schools’ absorptive capacity to solve the problem of overcrowding and get rid of the system The two periods, which negatively affect the quality of education and put pressure on the infrastructure of the existing schools, as it is expected that 18 percent of the school’s students will be from the sisterly Syrian community.

She added that the establishment of these schools will be in line with the vision and strategy of the Ministry of Education in responding to this challenge, as this program targets both Jordanian and Syrian children, who live in communities suffering from the consequences of Syrian asylum.

She thanked the European Union tribes, the German government, the German Development Bank and the Ministry of Public Works for their tireless work to achieve the mission of the Ministry of Education in providing equal opportunities for access to high-quality education that enables the learner to engage in creative and critical scientific thinking, to work in a team spirit, and to be equipped with skills and values, to be active citizens belonging to their homeland and contributors. In the elevation of the world and humanity.