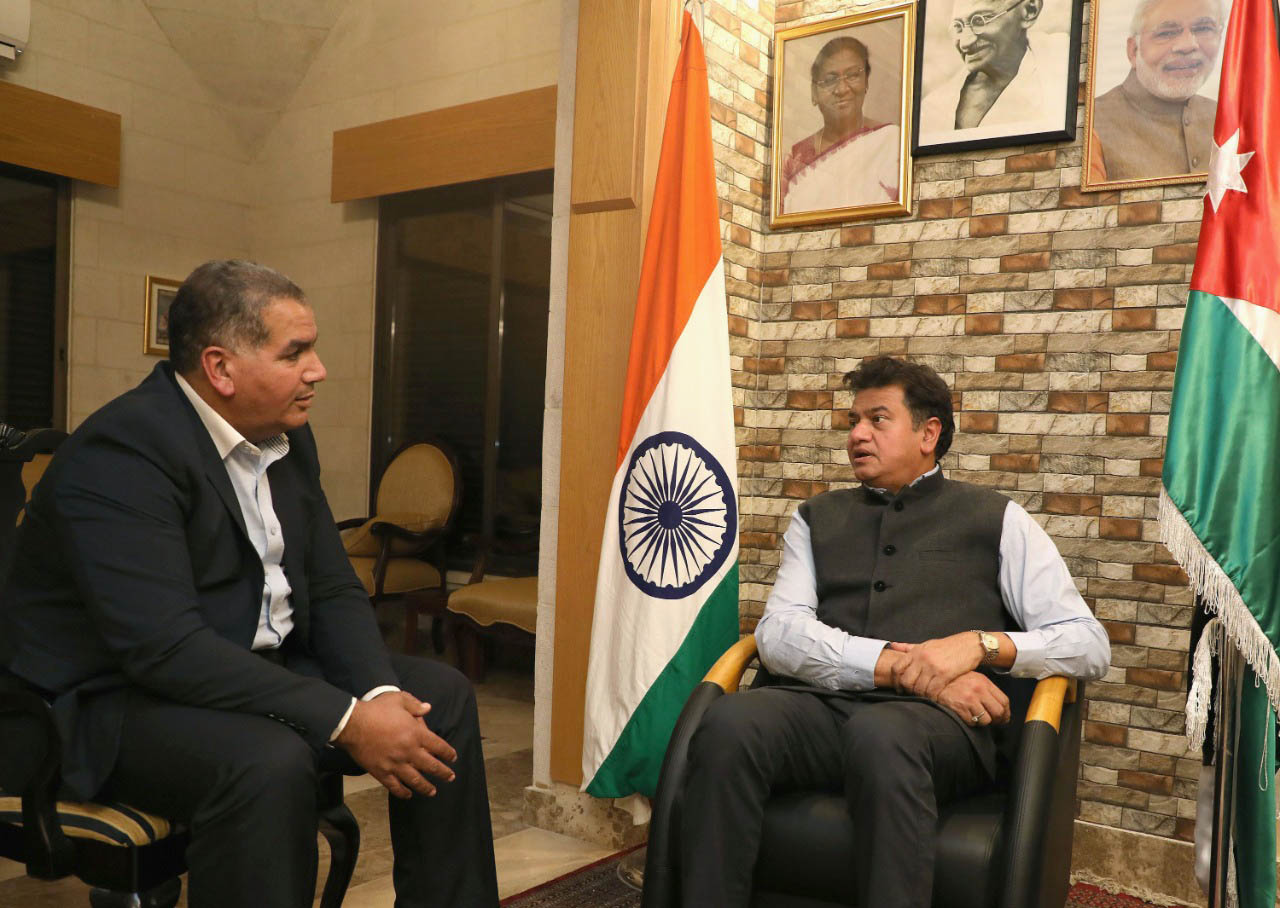 Amman, Jan. 25 (Petra) — The volume of trade between Jordan and India stood at US$2.716 billion in 2022, recording an exceptional annual growth of 60.13%, Indian ambassador to Amman, Anwar Halim said, indicating that the two countries have set a trade target of $5 billion to reach by 2025.

In an interview with the Jordan News Agency, on the occasion of his country’s National Day, Halim stated “since the first trade agreement signed between the two countries in 1960, several agreements have followed until date enhancing our economic cooperation,” stressing that bilateral trade has grown rapidly despite global economic downturn with India emerging as Jordan’s 4th largest trading partner in 2021.

He added that the Indian-Jordanian relationship has been an ascendant partnership that continues to grow unabated even during the difficult times of Covid-19 and the global economic downturn.

Speaking about the volume of Indian investments in Jordan, he pointed out that the Indian investments in phosphates and textiles amount to more than US$1.3 billion, noting that the Jordan Phosphate Mines Company (JPMC) and Indian Farmers Fertilisers Cooperative (IFFCO) established a joint venture project worth US$860 million for manufacturing Phosphoric Acid.

The JPMC and Arab Potash Company signed memoranda of understanding and agreements with a number of Indian fertilizer companies and manufacturers worth US$2.5 billion, he further said, adding “over 15 garment companies, owned by Indians, with a cumulative investment of around US$500 million are located in the Qualified Industrial Zones (QIZs). All finished products are exported outside Jordan which amounts to more than a billion USD worth of garments.”

Commending the bilateral relations, the envoy underscored that India considers Jordan an important partner in the region, saying “both our countries are committed to multilateralism, share common concerns in international fora, and strive for global peace and stability. Our exchanges and interactions have diversified in terms of depth, substance, and content in recent years.”

“It is worth mentioning that our relationship has been an ascendant partnership that continues to grow unabated even during the difficult times of Covid-19 and the global economic downturn. Today, our ties cover a wide range of areas, including political cooperation, trade and investment, technology, culture, health, agri-commodities, textile, chemicals and fertilizers, defense and security, development partnership, and so on,” he added.

In view of the continued momentum marked by regular high-level interactions, reinforced by meetings of His Majesty King Abdullah II and the Indian Prime Minister, the ambassador expected a bright India-Jordan partnership, noting “We look forward to further strengthening and diversification of our closeness in the coming years.”

Talking about the joint educational, cultural and technical cooperation, Halim pointed to the India-Jordan Center of Excellence in Information Technology (IJ-CoEIT), a state of the art IT facility that has been established by the Ministry of External Affairs and fully funded by the Indian government.

“It is envisioned that 3000 Jordanian experts/professionals would be nurtured at the Center in a span of five years. Under this participative model, the Government of India is sponsoring training programs for 150 Master trainers/experts from Jordan at premium institutes of technology in India, who in turn would be imparting further training to Jordanian youth at HTU using the facilities at the IJ-CoEIT, thus making the center completely managed by Jordanian expertise,” he added.

The envoy also stressed that India is committed to sharing its developmental experience with Jordan through capacity-building programs under our India Technical and Economic Cooperation program (ITEC), which is an avenue to strengthen the contact between the two countries’ citizens.

The Indian Council for Cultural Relations (ICCR) offered five annual scholarships to Jordanian students for higher education in India during the last year, he noted, highlighting that there are over 500 Jordanian students studying in different universities in India.

Responding to a question about the Indian Community in Jordan, the official mentioned that 15,500 Indians reside in Jordan working in textile, construction, manufacturing, fertilizer companies, healthcare sector, universities, IT, finance, and multilateral organizations.

Speaking on cooperation in the field of Counter-Terrorism, he said that India is an active participant in the Aqaba process, emphasizing the importance of the Process in facilitating regular and comprehensive dialogue on Counter-Terrorism among global stakeholders.

On the Palestinian issue, the envoy underscored that “India highly appreciates the constructive role and the diplomatic efforts by Jordan led by His Majesty to find a peaceful solution to the Palestine issue,” adding “India’s ties with the friendly people of Palestine are rooted in our common history. We have always supported the Palestinian people in their pursuit of economic and social development with dignity and self-reliance. We are hopeful that direct talks between the Palestinian and Israeli sides will resume to find a comprehensive and negotiated solution.”

India has also been at the forefront of extending developmental assistance to Palestine over the years, he stressed, indicating “our flagship projects such as India-Palestine Techno Park, Palestine National Printing Press, and four schools are already functional while other projects, including the Palestine Diplomatic Academy, Women Empowerment Centre (Turathi) and a Super Speciality Hospital are under implementation. We have substantially enhanced our contribution to UNRWA in recent years to strengthen its hands for humanitarian activities.”

India has assumed the Presidency of the G-20, he said, adding that Prime Minister Narendra Modi has emphasized that India’s G20 Presidency will be inclusive, ambitious, decisive, and action-oriented.

“The theme of our G20 Presidency, ‘One Earth, One Family, One Future’, symbolizes hope and our goal to bring the world together for global good to shape a new paradigm – of human-centric globalization,” he noted.

“Over the past years, India’s growth story has been exceptional, including in the fields of agricultural production, nuclear and space technology, affordable health care, world-class educational institutions, and biotechnology, to becoming an IT power and having the third-largest start-up ecosystem in the world,” he stressed.

India has emerged as the fastest-growing major economy in the world, the envoy highlighted, saying “it is expected to be one of the top three economic powers in the world over the next 10-15 years. We are sincere that all our friendly countries would share this enhanced prosperity and fruits of our development.”