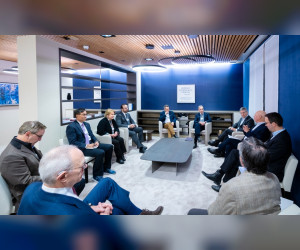 The Council will be an important institutional community to act as a sounding board for the Forum’s long-term strategy and help it to play a particular role as an informal, yet efficient global bridge-builder and annual platform that encourage business growth and establish international cooperation and dialogue.

Al Gergawi stressed that the UAE’s participation in the World Economic Forum over more than 20 years reflects the pioneering role of the country, which was able to consolidate its position as a global hub for positive future change under the leadership of President His Highness Sheikh Mohamed bin Zayed Al Nahyan, who seeks to maximise the UAE’s international role in achieving prosperity and development in the world.

Al Gergawi added that the UAE valuable presence in global forums and international platforms reflects the directives of His Highness Sheikh Mohammed bin Rashid Al Maktoum, Vice President, Prime Minister and Ruler of Dubai, aiming at strengthening the country’s role as a pivotal partner in global efforts to confront the economic, social and environmental challenges.

The Forum concluded its annual meetings for 2023, today, in Davos, Switzerland, by holding the first meeting of the WEF Leadership Council, which includes a group of the most prominent international figures in the fields of economy and business.

The World Economic Forum has become one of the most important global platforms concerned with working on developing and formulating visions and strategies for the good of humanity and contributing to creating a bright future for current and future generations.