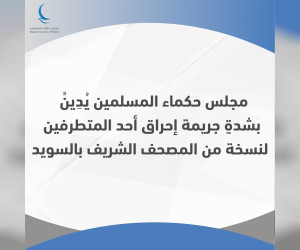 ABU DHABI, 23rd January, 2023 (WAM) — The Muslim Council of Elders, under the Chairmanship of the Grand Imam of Al-Azhar Dr. Ahmed Al-Tayeb, has expressed its utmost condemnation of the burning of the Holy Quran by an extremist in Sweden.

The Council strongly denounced such vile actions that provoke and insult nearly two billion Muslims around the world, calling for an end to hate speech, the instigation of discord and to respect the beliefs of others by not desecrating religious sanctities.

The Council reiterated its condemnation of this criminal act, which contradicts human values and represents the worst kind of racism. Such actions will only fuel extremism and terrorism while undermining efforts to spread peace and coexistence.