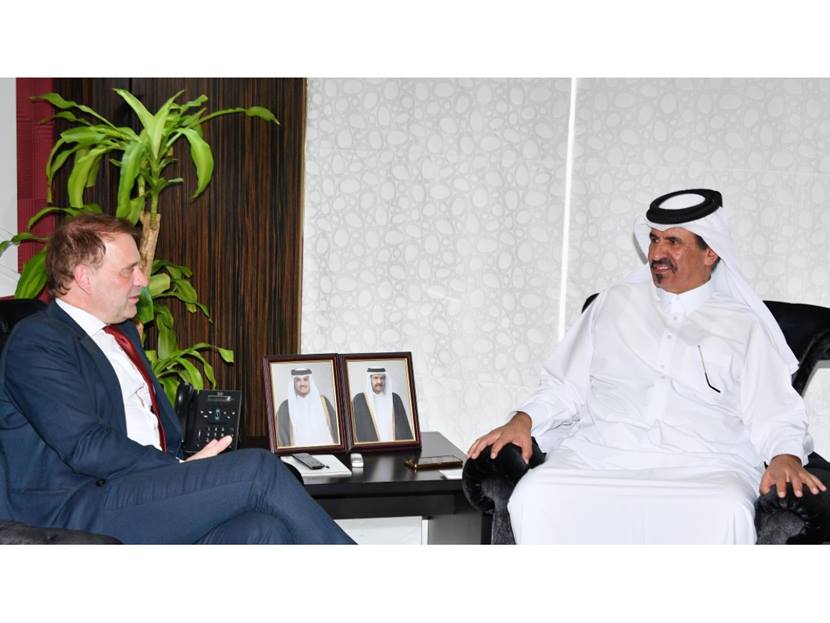 Doha, January 22 (QNA) – Qatar Chamber First Vice-Chairman Mohamed bin Twar Al Kuwari met with Minister Counsellor and the new Head of Trade and Economic Affairs Section at the Delegation of the European Union in Riyadh Thomas Jurgensen to discuss means to enhance economic and commercial relations between the State of Qatar and the EU countries.

During their meeting on Sunday, they discussed the private sector’s role in activating trade and investment exchange.

Following the meeting, Al Kuwari praised the close relations between the State of Qatar and the EU countries, noting that there are mega Qatari investments in a number of European countries such as France, Germany, and others.

Qatar Chamber First Vice-Chairman welcomed the European investments in various economic sectors, especially in areas that localize advanced technologies He said that there are numerous opportunities for cooperation between Qatari companies and their European counterparts in light of the presence of advanced infrastructure and attractive economic legislation.

He also stressed that Qatar’s success in the FIFA World Cup Qatar 2022 opens new opportunities for growth in various sector like services, tourism, food security, petrochemicals and other, assuring that the private sector would play leading role in the projects that will be implemented beyond the tournament.

For his part, Thomas Jurgensen said that his visit aims to get acquainted with aspects of cooperation between Qatari and European companies and the most important sectors that attract EU businessmen to invest in Qatar.

He praised Qatar’s success in hosting the FIFA World Cup 2022, noting that EU companies are interested to learn more about the investment climate in Qatar. (QNA)