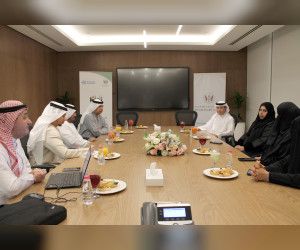 SHARJAH, 23rd January, 2023 (WAM) — During its work of the 4th regular session of the 10th legislative term, the Health Affairs, Labour and Social Affairs Committee (HALSAC) of Sharjah Consultative Council (SCC), visited the Sharjah Health Authority (SHA) in its new headquarters in Sharjah, discussing various aspects of health care and the provision of different treatment services.

Dr. Abdulaziz bin Butti Al Muhairi, Member of the Executive Council of the emirate of Sharjah, Chairman of SHA, and Amal Ahmed Al Qatari, Director of the Health Insurance Department at the Authority, attended the meeting.

Dr. Al Muhairi welcomed the delegation and briefed them on the Authority’s commencement of its work after the Emiri Decree No.12 of 2010 was issued by H.H. Dr. Sheikh Sultan bin Muhammad Al Qasimi, Supreme Council Member and Ruler of Sharjah. He further stressed that the establishment of the Authority reflects the interest of His Highness in ensuring a decent life for all the citizens, especially in the development of health care services, contributing in enhancing the Authority’s goals, contributing in the development march of the emirate of Sharjah.

The members of the Council suggested a number of proposals, reflecting the opinions of a large segment of the citizens of the emirate of Sharjah, regarding the various services provided by SHA, lauding the efforts of His Highness the Ruler of Sharjah in ensuring the quality of health care in the emirate, as well as its development and progress.

In turn, Dr.Al Muhairi and Amal Ahmed Al Qatari gave an explanation about the health insurance policy in the emirate of Sharjah and the services provided by the University of Sharjah Hospital for the Elderly, shedding light on the Authority’s keenness to attract specialised investments in the health sector, according to the highest international standards.

After the meeting, the male and female members visited the clinics and health centres at SHA’s headquarters and learned about the treatment services provided.