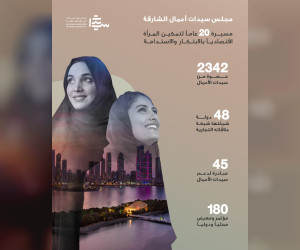 SHARJAH, 25th January, 2023 (WAM) — With a diverse membership of 2,342, the Sharjah Business Women Council (SBWC) has fostered a positive business environment and increased women’s participation in the economy across various industries and sectors.

The SBWC continues to be a valuable resource for women in business, empowering businesswomen and entrepreneurs since its establishment in 2002 under the patronage of the wife of the Ruler of Sharjah, H.H. Sheikha Jawaher bint Mohammed Al Qasimi, and Chairperson of NAMA Women Advancement.

SBWC empowers and supports businesswomen by providing current tools and resources they need to succeed in today’s rapidly changing business landscape, including knowledge in renewable energy and artificial intelligence.

The council promotes investments in strategic sectors such as agriculture, industry, and technology, aligning with the country’s goal of a strong and adaptive economy.

SBWC also focused on a wide range of traditional and non-traditional sectors, including retail, e-commerce, hospitality, healthcare, perfumes and jewellery, printing, publishing, journalism, media, and the arts, which has helped its members to connect and expand their business with the latest trends and opportunities. The council’s efforts have not only helped its members to grow, but also contributed to the overall development of the economy.

Sheikha Hind bint Majid Al Qasimi, Chairperson of SBWC, stated that the council’s vision aligns with the established national principles, mainly the first two “Principles of the 50”, which focus on developing all regions of the country in terms of urbanisation and development, and prioritising economic growth and development as the supreme national goal of building the most vibrant and active economy globally.

She added, “The council’s strategy focuses on sustainability by building on past initiatives and projects while constantly introducing new enterprises that attract female entrepreneurs from various industries. We ensure SBWC remains an inclusive and empowering platform where skills and ideas can be shared, thus contributing to economic prosperity, aligning with the vision of H.H. Dr. Sheikh Sultan bin Muhammad Al Qasimi, Supreme Council Member and Ruler of Sharjah, and the directives of H.H. Sheikha Jawaher bint Muhammad. This helps create a business environment that elevates women to become leaders in their industries.”

Over the course of twenty years, the council has sought to expand its services in various sectors and attract more members. In its inaugural year, SBWC trained and honed the skills of 31 members and kept pace with the influx of new joiners launching a number of new services to meet their needs and aspirations.

By providing consultations and providing support for members, in partnership with local as well as international specialists and experts, SBWC offered exclusive discussions to its members developing and advancing their skills through training and workshops, in addition to networking sessions to help them successfully launch their projects and businesses.

BWC sponsors its members to participate in local and international seminars and forums in addition to participating in trade missions which gives them access to a plethora of knowledge and incredible networking opportunities.

Moreover, members are able to enrol in several programmes and initiatives accessible through the SBWC app to market their projects and services on various platforms. The app provides a comprehensive overview of the council’s programmes and resources in addition to exclusive discounts.

Since its establishment, SBWC has launched 45 initiatives, including seven newly established projects in 2022, to equip and hone businesswomen’s skills and capabilities.

By the end of 2022, SBWC had taken part in 180 exhibitions and forums in various sectors that bolstered its members’ presence on the international stage, including GITEX, Women in Tech Forum, and even Torino Fashion Week. The council also provided an opportunity for its members to take part in its trade missions to gain experience from their counterparts around the world.

SBWC have received a great number of delegations and missions that have further expanded the council’s network during these two decades, with its members reaching 48 countries in the Middle East, Asia, Europe and the Americas, including significant financial and economic centres such as the United Kingdom, Malaysia, Japan, Kuwait, Sweden, Brazil, and other countries that have strong economic partnerships with the UAE.