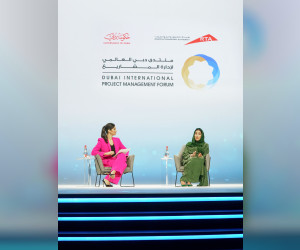 The leadership’s confidence in the competencies of women has enabled the nation to be a global leader in gender balance, she noted, while speaking at the 8th Dubai International Project Management Forum (DIPMF), being held under the patronage of H.H. Sheikh Hamdan bin Mohammed bin Rashid Al Maktoum, Crown Prince of Dubai and Chairman of Dubai Executive Council, from 23rd-26th January at Madinat Jumeirah.

The rapid progress that the UAE has achieved in gender balance is demonstrated by the country being ranked first in the Arab world and 11th globally on the Gender Inequality Index (GII) of the United Nations Development Programme’s Human Development Report 2022, Al Marri said. The country has jumped 38 positions on the Gender Inequality Index since the establishment of the UAE Gender Balance Council seven years ago. The UAE was also ranked first for the second consecutive year both in the World Bank’s ‘Women, Business and the Law 2022’ report and the World Economic Forum’s Gender Gap Report 2022, she added.

Al Marri said the year 2022 saw the country’s private sector further strengthening its involvement in initiatives to accelerate the implementation of the United Nations’ Sustainable Development Goal 5 (SDG 5). A total of 56 local and international companies based in the UAE have joined a national initiative to raise the percentage of women occupying senior leadership positions to 30 percent by 2025. Some companies have already increased the percentage of senior women leaders in their organisations to 27 percent, Al Marri noted.

She also said that by demonstrating their capabilities in various fields, women have gained the confidence of the UAE leadership. Women comprise 27.5 percent of the UAE cabinet and 50 percent of the UAE Federal National Council, and hold key positions as members of the diplomatic corps. “UAE women have made substantial contributions in various sectors and play vital leadership roles in accelerating the growth and sustainable development of the nation,” she added.

Since its establishment, the efforts of the UAE Gender Balance Council have been instrumental in raising Dubai’s rankings in various global gender balance reports and indices.

Highlighting the remarkable role of H.H. Sheikha Fatima bint Mubarak, Chairwoman of the General Women’s Union (GWU), President of the Supreme Council for Motherhood and Childhood, and Supreme Chairwoman of the Family Development Foundation (FDF), in promoting women’s development, Al Marri said the ‘Mother of the Nation’ worked tirelessly to ensure that women became equal partners in the UAE’s development process.

Guided by the leadership of H.H. Sheikha Manal bint Mohammed bin Rashid Al Maktoum, President of the UAE Gender Balance Council, President of the Dubai Women Establishment, and the wife of H.H. Sheikh Mansour bin Zayed Al Nahyan, Deputy Prime Minister and Minister of the Presidential Court, the Council continues to foster close collaboration with leading local and international organisations to achieve its goals, Al Marri said. The Council has launched many projects and initiatives including the Global Gender Circle, and the UAE Gender Balance Index to encourage adoption of gender balance best practices.

She further noted that the UAE Gender Balance Council constantly reviews existing practices and legislation to recommend new policies to enhance the growth, participation and wellbeing of women. From being ranked 49th in the UNDP’s Gender Inequality Index in 2015, the UAE rose to the 18th place in 2020, and 11th in the 2022 edition of the Index. The growth in rankings is aligned with the goals set by His Highness Sheikh Mohammed bin Rashid Al Maktoum, Vice President, Prime Minister and Ruler of Dubai, to advance gender balance.

Al Marri further said the UAE Gender Balance Council’s selection as the World Economic Forum’s knowledge partner to advance gender balance globally, recognises the nation’s pioneering and influential role in advancing the gender balance agenda in the Arab world. In partnership with the World Bank, the UAE Gender Balance Council has set up a Centre for Excellence in the country to share the UAE’s expertise in the field and provide assistance to countries in the region to bridge the gender gap.

Al Marri, who participated in the 52nd Annual Meeting of the World Economic Forum, held last week in Davos, Switzerland, as part of the official UAE delegation, said that while many other countries are still discussing initiatives to set up crèches in the workplace, the UAE implemented an initiative led by H.H. Sheikha Manal bint Mohammed to establish childcare centres in workplaces as early as 2008.

She called on the private sector to play a bigger role in advancing gender balance as part of the leadership’s broader vision for women’s development and empowerment.

Highlighting the priority that the UAE’s leadership has placed on women’s education, Al Marri said, 56 percent of UAE’s graduates in STEM fields are females, one of the highest rates in the world. Citing examples of exceptional gender balance achievements in Dubai organisations, she said the Roads and Transport Authority (RTA) employs 100 women engineers. Due to the country’s strong investment in education, women are active participants in sectors across the economy.

Al Marri also highlighted the role of the media as a vital partner in conveying an accurate picture of the UAE’s gender balance achievements.

The UAE’s gender balance model seeks to find the ideal balance between women’s participation and empowerment in public and professional spheres with their role in the family as mothers who play an active role in the development of their children, Al Marri said, in conclusion.