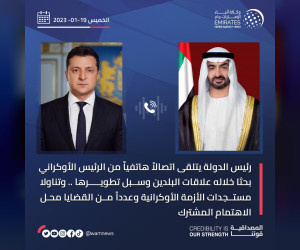 ABU DHABI, 19th January, 2023 (WAM) — President His Highness Sheikh Mohamed bin Zayed Al Nahyan today received a telephone call from Volodymyr Zelenskyy, President of the Republic of Ukraine, during which they discussed the relations between their countries and ways to develop them.

The two leaders also reviewed the latest developments in the Ukrainian crisis and a number of issues of mutual concern.

His Highness Sheikh Mohamed bin Zayed highlighted the importance of continuing communication and talks to find political solutions to the Ukrainian crisis, in light of its humanitarian and economic fallout that has impacted the entire world.

The UAE President also underscored the UAE’s humanitarian approach which entails providing aid to all peoples of the world, stressing the UAE’s support for all initiatives and efforts aimed at reaching a political solution that puts an end to the crisis and re-establishes security, stability and peace.

His Highness Sheikh Mohamed also offered his condolences to President Zelenskyy over the death of Ukrainian Interior Minister Denys Monastyrsky and a number of officials and civilians, who died in a helicopter crash.

For his part, the Ukrainian President expressed his thanks and appreciation to His Highness Sheikh Mohamed bin Zayed for the humanitarian support that the UAE continues to provide to the Ukrainian people, and for his active role in promoting peace.