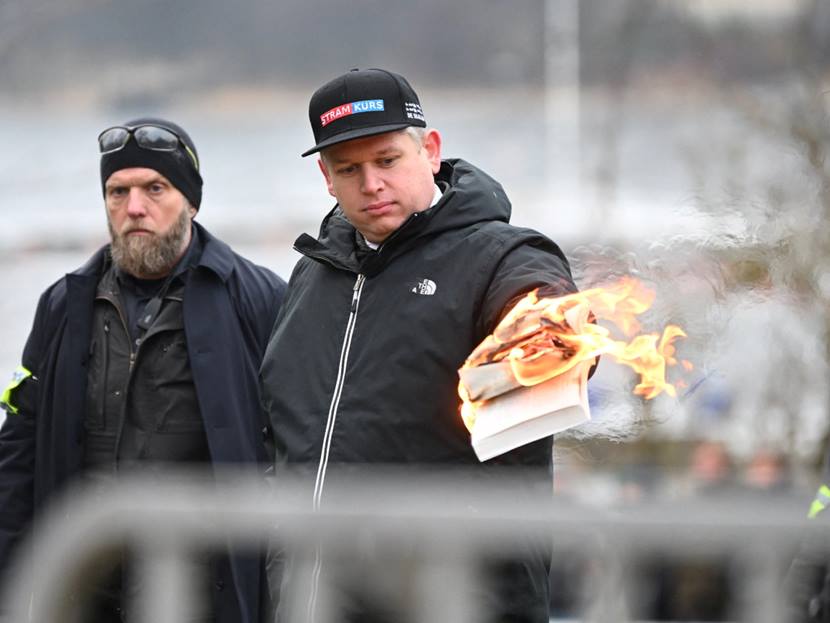 Doha, January 22 (QNA) – A wave of strong fury and denunciation has swept the Arab and Islamic world after one of the far-right member in Sweden burned a copy of the Holy Qu’ran in front of the Turkish Embassy in Stockholm, in a racially-motivated malevolence which is hostile to the religion of peace and harmony.

All reactions have unanimously described such a heinous crime as provocation against the feelings of Muslims all over the world, and an indicative of escalating the hatred level in some western countries against Islam and Muslims.

They demanded the Swedish authorities to uphold its responsibility and never tolerate such diabolical provocations, as the incident triggered wide fury and anger among Muslims, followed by condemnations from Arab and Islamic countries.

In this context, the State of Qatar condemned and denounced this brutal incident and considered it as dangerous provocative act against the feelings of over two billion Muslims in the world.

The Qatari Ministry of Foreign Affairs confirmed in a statement the Qatar’s rejection to all forms of hate speech that is based on belief, race or religion, and to involve the sanctities in the political standoff, warning that hatred campaigns against Islam and Islamophobia speech have witnessed a dangerous escalation with the continuation of systematic calls to replicate the targeting of Muslims in the world.

The Ministry called on the international community to assume its responsibilities to reject hatred, discrimination, incitement and violence, and stressed the importance of upholding the principles of dialogue and mutual understanding.

The Ministry of Foreign Affairs reiterated the State of Qatar’s full support to tolerance and mutual coexistence values, in addition to its keenness to lay the foundation of international peace and security principles through dialogue and understanding.

In Riyadh, the Saudi Ministry of Foreign Affairs expressed its strong condemnation and denunciation over allowing one of the far-right elements in Sweden to burn a copy of the Holy Qu’ran, and reiterated its firm position on the importance of propagating values of dialogue, tolerance and coexistence and repudiating hatred and extremism.

In addition, Kuwait and Sultanate of Oman also expressed their denunciation over burning a copy of the Holy Qu’ran, and stressed that such an act is provocative against Muslims’ feelings and Islamic sanctities.

Also, Egypt condemned such as crime and described it as outrageous act that provokes the feelings of millions of Muslims in all over the world.

The Egyptian Ministry of Foreign Affairs warned against the menace of the spread of such acts that offend religions and foment hate speech and violence, calling for the promotion of peaceful tolerance and coexistence values.

The Turkish Ministry of Foreign Affairs also vehemently condemned the incident of burning a copy of the Holy Qur’an, pointing out that such outrageous act is an indicative of the alarming level Europe has attained in its racism and hostility against Islam.

Allowing the Swedish authorities to burn a copy of the Holy Qur’an is an act that emboldens hatred and Islamophobia crimes, said the Turkish Presidency, adding that attacking the sacred values is not a freedom, but rather a modern arrogance.

Consequently, the Turkish Minister of Defense cancelled the visit of his Swedish counterpart to Turkey that was scheduled on Jan. 27, over the failure of the Swedish authorities to take measures against protests that stand against Turkey, in addition to burning a copy of the Holy Qur’an in Stockholm.

Pakistan condemned the burning of the Noble Qur’an in Sweden, and described the incident as meaningless, provocative and an indicative of Islamophobia, and said that such measures are not covered by any legitimate expression of the right to freedom of expression or opinion.

Jordan, Morocco, the GCC states, the Muslim World League (MWL), the Organization of Islamic Cooperation (OIC), the Union of OIC News Agencies, Hamas Movement and Vice President of the Central Spiritual Administration of the Muslims of Russia also denounced the heinous crime. (QNA)