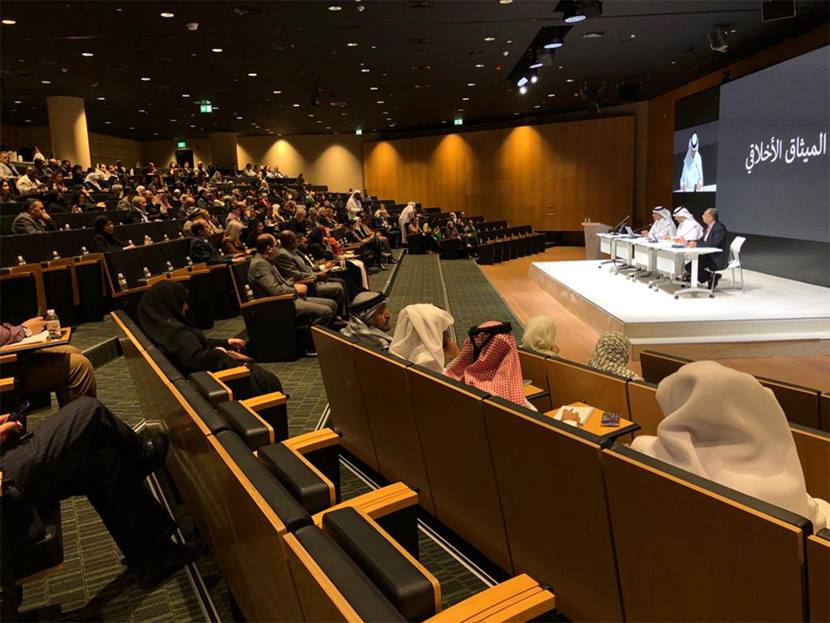 Doha, January 23 (QNA) – The Ministry of Education and Higher Education (MEHE) underlined the importance of schools and Kindergartens’ commitment to the code of ethics that was issued in Arabic and English languages in 2022, including the key materials set forth in the charter.

This came during a meeting held by the Private Education Affairs Sector at MEHE with the male and female managers of schools and Kindergartens, during which they discussed an array of topics and themes that must be adhered to, in addition to raising the awareness of school community on their criticality.

During the meeting, Assistant Undersecretary for Education Affairs at MEHE Omar Abdel Aziz Al Naama outlined that the most critical points schools and Kindergartens must adhere to, entail the code of ethics for private schools and kindergartens that was issued in Arabic and English languages in 2022.

This is in addition to the key materials of functions and duties included in the code, starting from schools’ owners, managers, the administrative and teaching staff, guardians, students and all councils, Al Naama said.

He emphasized the importance of sensitizing the school community through holding constant workshops, seminars and programs, stressing the criticality of adherence to the Islamic and national identity values, including the values of the authentic Qatari community. He added that all these things should be promoted through conducting a wide range of activities, programs and lessons dedicated to students, in addition to preparing constant training workshops for the administrative and teaching crews, and sanitizing the new teachers concerning those ethics, and other relevant matters and commitments.

Private schools in the State of Qatar have applied the teaching of the three compulsory materials: “Arabic language, Islamic education and Qatari history”, whose outcomes have been positively and remarkably demonstrated during the last three years, as well as their endeavors and keenness to execute these policies and persistently verify their outcomes, Al Naama pointed out.

He added that measures were positive with respect to students’ academic accomplishment, considering the importance of undertaking all efforts by teachers, whether for the three compulsory materials, or other curricula, outlining the importance of taking all necessary measures to ensure safety and security of school community, in addition to setting clear-eyed and approved planning for all relevant matters. He elucidated that all these key foundational aspects achieve safe and good school environment, which precipitate undertaking further efforts and setting plans by school administrations to upgrade their educational findings.

In addition, Al Naama underscored the importance of clarifying the general policies pursued by schools for students’ guardians, administrative and teaching staff, and setting specified protocols to identify their roles and responsibilities.

He pointed out that MEHE intends to lay out general policy guidelines that help private schools and kindergartens complete its policies that will be announced later, adding that the education sector intends to form a permanent consultative committee under the chairmanship of Assistant Undersecretary for Education Affairs, in pursuit of presenting the ideas and sharing the proposals within a joint partnership between MEHE and private education institutions to foster permanent partnership and cooperation between MEHE, private schools and kindergartens.

For his part, Director of Private Schools Affairs Department Rashid Ahmad Mohamad Al Ameri outlined the efforts undertaken by MEHE in the supervision and follow-up processes conducted by the department each year. He presented a sample of some studies that were conducted via general statistics, in addition to highlighting some aspects that require adherence from schools.

The meeting underlined the criticality of verifying the core educational and supporting sources to ensure they do not contravene the inherent community’s values, and conduct general oversight over all educational sources by the school teachers, including sources in libraries and other assisting sources, and essentially co-opt members of ad hoc committees to further review these sources.

In addition, the meeting underscored the importance of taking the activities, programs and competitions presented to students into account; that must primarily contain activities that promote national identity based on other parameters, in accordance with the guide issued on this matter, in addition to focusing on global events and instill them in the students’ hearts. (QNA)