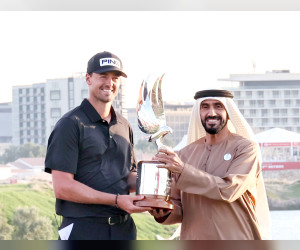 The Frenchman, who was crowned by H.H. Sheikh Nahyan bin Zayed Al Nahyan, Chairman of the Board of Trustees of the Zayed Charitable and Humanitarian Foundation, Chairman of the Abu Dhabi Sports Council, held a narrow one-shot lead in the closing stages on Sunday afternoon before holing out from a bunker at the 17th for a birdie to stretch his advantage to two.

And even though he ran into trouble at the 18th, a bogey there was enough to secure a one-shot win as he closed with a 66 to finish the tournament on 18 under par, with Australian Min Woo Lee and Sweden’s Sebastian Söderberg sharing second place on 17 under par.

Perez entered the final day one stroke back but made an excellent start as he made the turn at four under and continued his charge with back-to-back birdies to begin the back nine. He responded to a dropped shot at the 14th with a birdie at the 15th before wild scenes erupted on the 17th as the 30-year-old’s sublime bunker shot found the bottom of the cup.

That hole-out ultimately sealed his victory as he moved to the top of the Race to Dubai Rankings in Partnership with Rolex and second in the Ryder Cup European Points List, with the race for a spot on Captain Luke Donald’s team for the biennial contest at Marco Simone in September well and truly under way.

Three-time Major Champion Pádraig Harrington finished fourth on 16 under par after posting rounds of 64-67 over the weekend, while Sweden’s Alex Noren and Italian Francesco Molinari shared fifth on 14 under par.

England’s Tyrrell Hatton, who aced the par three 13th on his way to a seven under round of 65, finished tied seventh with Australian Jason Scrivener and India’s Shubhankar Sharma joining him on 13 under.

Joburg Open Champion Dan Bradbury made it a memorable start to 2023 as he also carded a hole-in-one during the final round. The Englishman’s effort at the 17th hole earned him a Genesis G70 Shooting Brake, with the penultimate hole being sponsored by the global luxury automotive brand.

Finland’s Sami Välimäki was one of seven players sharing tenth after posting a ten under par round of 62 and setting a new course record at Yas Links Abu Dhabi.