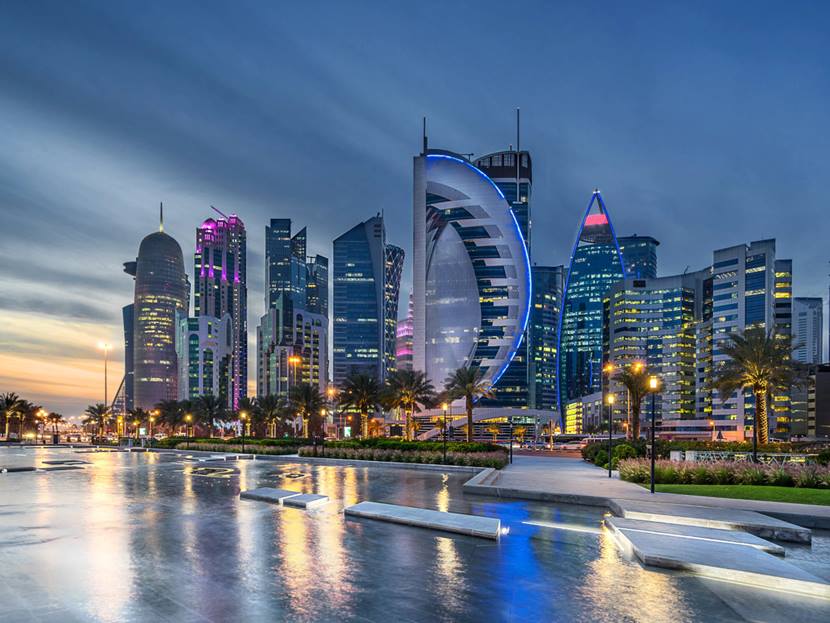 The conference was held by the Qatar Association of Certified Public Accountants (QCPA), under the auspices of HE Minister of Social Development and Family Maryam bint Ali bin Nasser Al Misnad, and in strategic partnership with the Global Compliance Institute (GCI), and with the participation of a number of local and international bodies.

In his opening speech, the Board Deputy Chairman of the QCPA, Abdullah Al Mansoori said the first of its type conference in the State of Qatar gains high importance amid the financial, economic and geopolitical crises hitting the world, as well as the supply chain disruption, inflation and the Covid-19 pandemic impacts, with countries seeking to prove their credit and investment ratings to receive funding from international agencies to avoid the risks and get out of these crises with minimal losses and without disrupting the development process.

The importance of global rating agencies in the global economy has increased amid the significant shift in global economic activity, especially the liberalization of financial markets and banking services, in addition to the development of financial engineering that increased the complexity of exchanges and obligations, particularly with the mergence of financial derivatives, Al Mansoori told the conference.

After the conclusion of the FIFA World Cup Qatar 2022, the 2023 budget was unveiled with no less than QR 29 billion surplus, despite adopting a conservative price for a barrel of oil at $US 65 at a time when the price of a barrel exceeds $ US 80, as a result of the remarkable recovery in global energy prices during the current year, to confirm the strength and durability of the Qatari economy and its ability to withstand the fluctuations and uncertainty in the global economy. The budget proved that the State of Qatar, under its wise leadership, continues to move forward with confidence in building its economy and development plans, and this is another evidence of Qatar’s political and economic stability, which makes it a fertile soil for investment and growth, Al Mansoori said.

He added that the solidity of the Qatari economy was confirmed by international rating agencies, with the S&P Global elevating the State of Qatar’s 2022 credit rate from -AA to AA, and Moody’s rating upgraded from stable to positive. In the same context, Fitch and Capital Intelligence agencies continued to rate Qatar’s sovereign rating at the level of AA with a stable outlook, which reflects the State of Qatar’s maintenance of a strong creditworthiness, especially since the Qatari economy succeeded over the years. Last year, it maintained positive growth levels for the overall economy of the country, in addition to the success of companies and financial institutions listed on the Qatar Stock Exchange in overcoming internal and external challenges and turmoil in the global economic system and achieving strong financial returns for 2022.

Al Mansoori said that the most prominent strengths on which these strong ratings are based are the high GDP per capita, huge hydrocarbon reserves, the growth of global demand for oil and gas, the high net asset value, the private sectors contribution to economic activities, and the efficient monetary and fiscal policies, which confirms the strength, flexibility and ability of the local economy to face economic challenges and fluctuations, in addition to the financial stability witnessed by the state, which increases the countrys attractiveness to foreign investments, and the strengthening of the economic methodology based on completing the role of legislation and law in economic, commercial and financial practices, as well as the positive partnership between the public and private sectors.

This contributed to raising the level of the country’s economic performance and the attractiveness of international financial institutions’ dealings with the State of Qatar to increase the professionalism and positivity of the economy.

Speaking to the conference, GCI representative Ahmed Tartir stressed the importance of assessing the geographical risks of countries in terms of financial crimes and anti-money laundering international standards, explaining the Financial Action Task Force (FATF) and the mutual evaluation process carried out by member countries.

He stressed the need for the concerned authorities in countries, especially regulators such as central banks and securities authorities, to enact legislation that protects the states financial system from exposure to the consequences of financial crimes, and that these legislations are commensurate with the sector they regulate, and the importance of involving the private sector in the analysis process to reach legislation that is compatible with international standards and at the same time in line with the requirements of the sectors subject to regulation in addition to the procedures that must be taken by banks and financial institutions to comply with international standards.

Tartir focused on the risk classification mechanism for the countries to which each institutions clients belong, explaining the indicators that must be taken into account and the importance of this being part of a comprehensive mechanism for assessing the overall risks of clients. He also called for considering the FATF classification factors regarding customer risks, products and delivery channels, in addition to the evaluation methodology, the report issuance process for the country being evaluated, and the period for correcting errors.

S&P Global representative Benjamin Young affirmed that the State of Qatar has obtained a strong credit rating at AA, pointing out that the rating criteria are based on basic pillars ranging from 1 to 6, with each having grades and economic ad financial elements and percentages.

The one-day conference discussed several axes on the work of rating companies and their experience at the level of countries and companies, the criteria used in rating operations, the value of rating at the level of credit and investment, the importance of rating in light of financial and economic crises, the role of credit rating agencies in evaluating financial values ,and its impact on the functioning of the financial markets. It highlighted the strength of the Qatari economy and its attractiveness for investment given its strong credit rating.