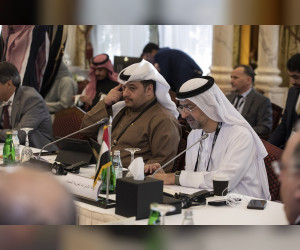 ABU DHABI, 20th January, 2023 (WAM) — The UAE recently participated in the eighth meeting of the Undersecretaries of Arab Ministries of Finance, where they discussed the latest developments in economic diversification policies and the current status of investment and economic growth in Arab countries.

The meeting was organised by the Arab Monetary Fund (AMF) on 18th and 19th January in Abu Dhabi.

Undersecretaries of Arab Ministries of Finance, along with a number of experts from the International Monetary Fund (IMF), the World Bank Group (WBG) and the Organisation for Economic Co-operation and Development (OECD), attended the meeting.

Dr. Abdulrahman Al Hamidy, Director-General Chairman of the Board of Executive Directors of AMF, inaugurated the meeting. Panel discussions were held, and entities gave presentations on various topics.

The presentations were “Revenue Mobilisation for a Resilient and Inclusive Recovery in the Middle East and Central Asia” by the IMF; “Improving Performance and Governance of State-owned Enterprises” by the WBG; and “The Role of Fiscal Policy in Supporting Climate Finance and Sovereign Green and Sustainable Financing Instruments”, and “Assessing Debt Sustainability to Face Vulnerabilities” by the AMF.

During his intervention, Younis Haji Al Khoori, Undersecretary of the Ministry of Finance (MoF), emphasised the importance of this meeting as an ideal platform to boost coordination in the field of fiscal policy among Arab countries. He also thanked the IMF team for presenting a working paper on mobilising domestic revenues, which has become an important issue given the need of many Arab countries to develop stable and sustainable government revenues and increase domestic revenues to support projects that achieve sustainable development goals.

Al Khoori stated that strengthening local resources requires a tax system through which governments can mobilise their revenues because stable and flexible government revenues can increase spending on development projects.

He also noted that the GCC economies have previously made significant changes to their public finances and redesigned their tax systems by reducing reliance on oil revenues and strengthening their non-hydrocarbon revenue sources through economic diversification. This, in turn, contributes to supporting growth, creating job opportunities, and strengthening national economies, as well as designing just, simple, and efficient tax systems.

The WBG paper titled “Improving Performance and Governance of State-owned Enterprises”, he mentioned that governments had made tremendous efforts to professionalise the performance of boards of directors in state-owned companies. This is done by granting them broad powers and greater independence, which in turn helps to improve their performance and enhance their role in drawing public strategies. This aligns with the spread of the principle of commercialising state-owned companies and expanding their participation in the market.

During the meeting, he commented on AMF’s paper, which tackled assessing the changing patterns of public debt over time and examining their sustainability. This is done by estimating the financial reaction, which compares the initial fiscal balance and the delayed public debt. On that note, Al Khoori mentioned that greater efforts should be made to ensure that sovereign borrowing helps achieve financial sustainability for public debt to remain on a sustainable path. He added that the returns that projects can generate to enable repayment should be reviewed before new loans are taken.

He said, “We believe that the Arab Monetary Fund should continue to cooperate with partner institutions and member states to enhance their ability to record and manage debts and ensure transparency. It should also assess the possibility of debt sustainability by maximising states’ ability to achieve stable returns and working with new lenders in many areas, such as improving their ability to participate in debt restructuring processes on a multilateral basis, when needed.”

On the second day, participants discussed how Arab countries enhanced food security and supported the transition to a circular carbon economy to achieve sustainable development. Panel discussions were held, and OECD gave a presentation on “Global Corporate Tax Reforms: Implementation Map and Implications for Arab Countries”.

Additionally, participants came together for an open discussion titled “Assessing the Impact of Tax Policy on Economic Growth in Arab Countries”.

On global corporate tax reforms, Al Khoori stated that during the past period, the UAE had prepared studies on corporate tax, which aims to develop financial resources and diversify sources of national income to achieve sustainable financial flows. This, in turn, will enable the country to work on development projects that will positively impact the economy and society.

“The adoption of a competitive corporate tax system based on international best practices will cement the country’s position as an international business and investment hub, advance growth, and support its strategic goals. It also reaffirms the country’s commitment to meeting international standards of tax transparency and preventing harmful tax practices,” he explained.